The Villa and the Kishu Tokugawa Edo Residence 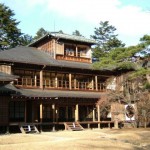 The Nikko Tamozawa Imperial Villa is built around the former Edo residence of the Kishu Tokugawa clan, which was brought from Edo to Nikko. The Edo residence was presented to the Imperial Household in 1872 and became the Akasaka Rikyu. It was then used variously as a temporary palace for emperor and as the crown princes’s residence until 1898.
The main three-story section of the residence was removed to Nikko and the villa built around it.
Three parts were used as the emperor’s living and sleeping quarters.

The Villa and the Kobayashi Residence 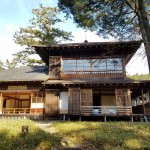 An area of about 23,000㎡, a quarter of the whole site of the Nikko Tamozawa Imperial Villa, once belonged to a villa named Nikko Tamozawa Garden, which was owned by a Nikko businessman called KOBAYASHI Nempo.
The Kobayashi family were proud of their large garden, a part of which survives and remains in the Nikko Botanical Garden.
Some of the Kobayashi residence was used as the Empress’s Living Room and Study.
Also the villa was used by the Emperor Emeritus, who first came here in 1944 as an evacuee and stayed here for about a year while he was still a young prince. 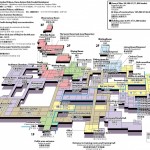 The Discovery of the Tokugawa crest (under the Imperial crest) 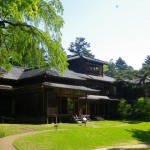 In process of reconstruction works of decorative metalware, one event amazed the people who interrelated the villa. In the nakayashiki parts of the villa, the family crests of the Tokugawa, styllized hollyhock, were frequently covered over by the Imperial hrysanthemum crests.
The Edo residence became the Akasaka Rikyu in 1872, the following year, the Nishinomaru-Goten section of the Imperial Palace was destroyed by fire, and Akasaka Rikyu was then used as the temporary Imperial Palace. But the production of decorative metalware was not on time for the temporary Imperial Palace.  Then the Tokugawa crests were covered over by the Imperial crests.
The discovery offers us another history of the Villa. 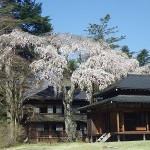 The Nikko Tamozawa Imperial Villa was constructed in 1899 for Prince Yoshihito (later Emperor Taisho) as a retreat, and was also used by three emperors and three princes until 1947.
The building is the biggest wooden imperial villa erected in the Meiji and Taisho eras. It consists of three parts that date, respectively, from the Edo, Meiji and Taisho eras, each representing the very best feature of the Japanese architecture of its time.
In order to transmit the skills and traditions of these architectural achievements to future generations, The Tochigi Prefectural Government has studied the techniques of each era and completed the restoration of the villa with the help of modern architects and artisans.

Guide to Use
■ Hours open to the public
○ April to October 9:00 – 17:00 (Last entry: 16:00)
○ November to March 9:00 – 16:30 (Last entry: 15:45)
■ Days closed
○ Every Tuesday (If the Tuesday is a national holiday, the Park is opened on the Tuesday and closed on the following Wednesday.)
○ December 29 through January 1
○ But, opened on 4/10 – 5/9, 8/13 – 16, 10/15 – 11/14, 1/2 – 5
■ Admission Fees
○ Adults and High school students: ￥600 (￥500 for groups of 20 or more)
○ Elementary and Junior high school students: ￥300 (￥250 for groups of 20 or more persons)
■ Rules for Use of Villa and Garden Park Facilities
○ Kindly refrain from eating, drinking, or smoking except at designated areas.
○ Alcohol is prohibited in the park and residence.
○ Please refrain from bringing any animals or pets into the park or residence.
○ Riding bicycles and motorcycles in the park is prohibited.
○ Please be sure to carry any trash you might have back with you when you leave the park and residence.
○ Please be respectful and courteous of others so that everyone may enjoy their visit to the park and villa residence.
○ Prior permission is necessary to sell any goods or articles, solicit or raise funds, take photographs for commercial purposes, or to shoot movies anywhere on the park grounds or residence.
■ Transportation to Nikko Tamozawa Imperial Villa Memorial Park
○ About 3 kilometers from the JR Nikko Station or Tobu Nikko Station.
○ From the Tobu Nikko Station, take the Tobu Bus bound for Yumoto Onsen,Chuzenji Onsen, Okuhosoo, or Kiyotaki, get off at Tamozawa and walk about 1 minute.
○ About 3.5 kilometers from the Nikko Interchange on the Nikko-Utsunomiya Toll Road.
■ Parking
Buses and large vehicles: ￥1,500; regular automobiles: ￥300; bikes and other two-wheeled vehicles: ￥150 (two hour parking) 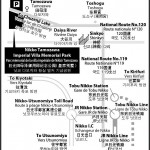